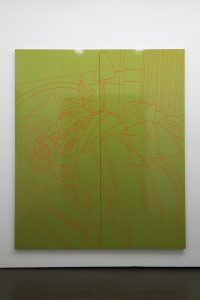 “The impetus for my practice is always a fixation on the language and images in use around me, be it an advertisement or an aphorism scrawled on a toilet wall. I borrow details from what I see and hear every day and remake or reconfigure them, at times rendering familiar ingredients strange and new.

I have produced sculptures of objects observed in the news, paintings inspired by illustrations found in a hardware store catalogues and social media vernacular, a film combining song lyrics with footage of a Japanese robot made for the purpose of training dentists… I recognise pictures and words as carriers of meaning as well as tools for persuasion. Isolating, repeating, or juxtaposing them, and even altering their scale, proportion, materiality, and so on, is, for me, a way to playfully deconstruct (and better understand) the elements that shape our perceptions of the world around us, of one another, and of ourselves.”