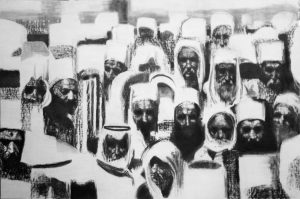 Abdallah Karkout is an experienced experimental artist, who has been practicing and running studio workshops and university courses, and lecturing for many years. From Theory to materials and techniques, Abdallah’s practicing and teaching cover a wide range of genres; drawing, painting, printmaking, sculpture and music. As a part of a growing collective cultural project, he is expanding his “Marsam” studio project, which has been established in the Middle East since (2004). It adopts a special developed method intended for art students at all levels of experience, and aspires to create an alternative cultural space outside the conventional sphere, and independently from the ’’art market’’ place and the local institutional authorities. The aim is to share knowledge and joy of research with apprentices and colleagues. “ The idea of  ‘Artist’ in its modern sense in the Middle East, is a ‘Westernized’ one that came along with the colonization of culture and was adopted by a class of supremacist bourgeoisie. Which has contributed to the alienation of art from its natural ‘organic’ environment. He comes from aculture which involves visionand imagery in the language of everyday life.  Arabic language has a poetic quality in its very nature. Historically speaking, poetry played an important role in Arabic culture, and to be a poet was considered a very important skill that a person must possess. Therefore, this art has been woven into people’s life, enrichingit with imagery and images. A sensory language came out of this, and an instant interplay between this language and imagination would emerge when a person (or a poet) has to reflect acurrent experience. Despite of the possible analogical relation between the narrative elements and the visual elements of a given experience, a visual experience is still autonomous and totally independent, giving the priority to it sown visual element. A visual experience, while its how interest in the surface of the observed object (the experienced), it’s still more concerned with the inner constancy of it. It is an experience which is beyond vision. It’s the natural consequence of the interaction of the human senses involved in the experience. It deals with the subjective as a reflection of the objective, but starting from the subjective. It seeks the objective (the source), coming again as a new reflection, arriving at a new subjective level, where the subjective starts to blend with the objective through an infinite series of mirroring process between the two.

A poet once said: ‘Poetry is the elimination of the spoken’ Accordingly, the act of making or creating of the image is an activity by which the creator invites the listener or the viewer to establish.

“For I’ve been always fascinated with the ’’untold’’. For me what makes one language special is not what you say when you use this language, but it’s what you don’t say which gives it its unique quality.’”