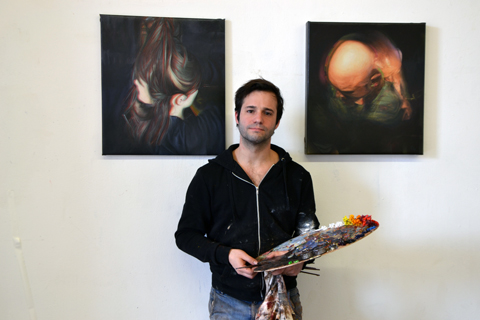 Chilean artist Diego Palacios (1983) began working as a painter in 2014. As an autodidact Palacios has acquired painting independently. For four years he has been intensively and continuously dealing with the theory and practice of painting. He is fascinated by the artistic skills of the old masters and studies their approach meticulously.

Palacios got an insight into the art world of Chile, where he made his first experiences with painting and worked in the studio of an artist friend. When he moved to France in 2008 – first to Paris, then to the countryside in the south of France – he came into contact with the art scene there and got to know new approaches in the field of painting. At that time, Palacios was still working in another profession – the wine trade. However, his interest in the arts already existed and grew more and more over the years until Palacios finally decided to turn his passion into a career. Although the artist never went to an art academy, he went through his own personal school by working in various places around the world and taking every opportunity to learn from the artistic demands and events there. He participated in artist residencies in Sweden and Scotland before he decided in early 2018 to move to Leipzig and be part of the LIA program.

Diego Palacio’s painting reveals various levels that shift between consciousness and the subconscious. This impression is supported by the play of light, shadow, and transparency. Palacio’s works indicate an old master approach, but is broken by contemporary subjects and elements.
Portraiture forms the emphasis in the oeuvre of the Chilean painter. The depicted persons were first staged by Palacios and then photographed. The artist then consciously processes these photographs digitally in order to create the break between the depicted, ancient-looking situation and the contemporary reference. The faces appear in a light reminiscent of Rembrandt or Van Dyck, and the clothes and gestures of the portrayed people also imply bygone times. However, these familiar features and the image that appears in the mind’s eye are broken by the glimmering color effects, distortions and reflections of the faces. Palacio’s images challenge the recipients, put their viewing habits to the test and stimulate questioning.