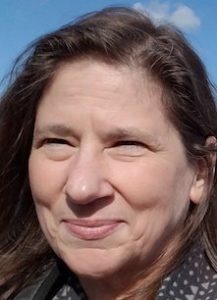 Influences on my art imagination include mathematics and science and nature, and the drive to communicate, describe, record. I have worked the longest time in non-representational watercolor painting, and in drawing.
The project I will do in Leipzig is an Image and Interview series, with photo portraits and interviews of Leipzig people.

The series includes portrait photography accompanied by a printed text, edited from an interview with the subject, using my own fixed set of questions. This work is appealing to me because I am deeply interested in people, how I see them, how they see themselves.
I am generating a rich impression of the person at that time, and in that context with me. I am fortunate in coming into contact with many interesting people of all sorts of life situations. I have a series of 9 portraits and interviews done in the US, and a series of 17 portraits and interviews, done in Iceland, and a group of 29, from Shetland.

In this work, I am moved by a desire to know, preserve, and present, interesting human beings whom I am in contact with, in my life era. The concept for a photographic record of my contemporaries was partially inspired by the work of Felix Nadar. The interview questions were created by me.

In painting, I feel comfortable and free working in watercolor because it requires me to decide and act, and does not allow me to plan and re-do. My natural ‘logical’ thinking tendency is toward complexity, thinking and re-thinking; examining, editing, perpetual refinement. In watercolor, my work process is quite different – I am forced to commit, and go ahead. In this medium, I work more freely and confidently, without the intermediation of my intention, logic, analysis, etc.

Also I have made some word-paintings which include written word, surrounded by responsive painting. My word-paintings are done when my thoughts about the work going onto the paper are rushing out in words, before color, so I record the words for that work, and then paint to illustrate or support them. They are sometimes created in response to grief, tragedy, or confusion.

The themes in my painting practice deal on a basic level with connection, relation, isolation, distance. The colors and forms resolve or enact forces and fitting connections. There is often a thought of composing a delicate balance between the parts of the image as they are accruing on the paper.

Additionally, I do black and white small drawing constructions, primarily when I am away from the studio.