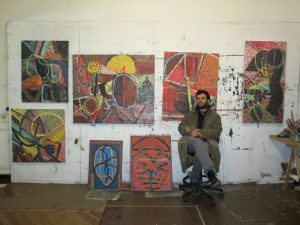 Martín Daiber lives and Works in Santiago de Chile. His work is usually developed through series of Works, exploring in each series with new materials or a different way to use painting. Since 2003 he had participated in several group and solo exhibitions.

“I’m much interested in paintings that experiment with chaos, works that contain or present an enigma. I see my work as an accumulation of residue from the act of painting. This residue is the product of an imaginary constituted from experiences, where references and multiple focuses of inspiration can range from the sublime to the trivial; an holistic dimension in painting. They are ideas and decisions that overlap; they corrupt and mutilate each other to reach a final common place. A final place that I can only sense but never surely know, because it is intangible, it is a floating image which essence I can perceive and it only becomes real at the same time it becomes the physical work of art itself.”