Nordic-Leipzig stipend of the Goethe-Institut 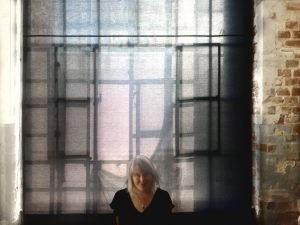 Hauksdottir is currently participating in the LIA Leipzig International Art Program in the Spinnerei in Leipzig Germany, she is further more engaged in research collaboration with the Level2: Lichen Lab and UofL Art Gallery in Lethbridge, Canada and the BarretHenzi Lab in the University of Lethbridge for her work Borderline Human. She was allowed to accompany a team of animal behaviorists to a research site in the Samara on the Great Karoo in South Africa this year for research and to gather subject matter for her works. She holds a visiting artist position at the Icelandic Academy of the Arts holding intermissive workshops there and along with Doreen Kutzke has developed a workshop on yodeling, drawing and acustical explorations. The duo has traveled with the workshop in Europe.

Gunnhildur Hauksdóttir graduated from Sandberg Institute (MFA) in Amsterdam, Holland in 2006 and has been a member of the Dieter Roth Academy since 2000. She was the director of the Living Art Museum in Reykjavík from 2011 to 2014. She is involved in publications, lectures and research on artist initiatives and performance art and holds a visiting artist position at the Iceland Academy of the Arts.

2008
The Living Art Museum. The Day You dont Find in the Calender An emotional reading with Kristín Ómarsdóttir. Reykjavik, Iceland.

2004
Het Glazenhuis, Dual collaboration with Irina Birger. Amsterdam, Holland
KlinkoBank, The theatre of the Arts, All psyched up, Reykjavik, Iceland

Culture night. The Containers, Collaboration with the city of Reykjavik and Samskip Shipping Company. Reykjavik, Iceland

2007
Spontaneous Support from the Centre for Icelandic Art. Reykjavik, Iceland

2003
Alaska, Times are changing, “Carrie and meat in curry” and “Hunter” Reykjavik, Iceland.
Gallery 21, “A Swedish Show”, The Tiger and the Polar bear, Malmö, Sweden.

Work related to art and education

2014
Director and Chairman of the Board of the Living Art Museum in Reykjavik Iceland until March 2011 2014.
Lectures in Museumology at the University of Iceland, Reykjavik, Iceland.
Development and overseeing of a series of lectures by various artist On Performance at The Sequences festival, Reykjavik, Iceland.

2002
A guide in the Reykjavik Art Museum – Ásmundarsafn. Reykjavik, Iceland